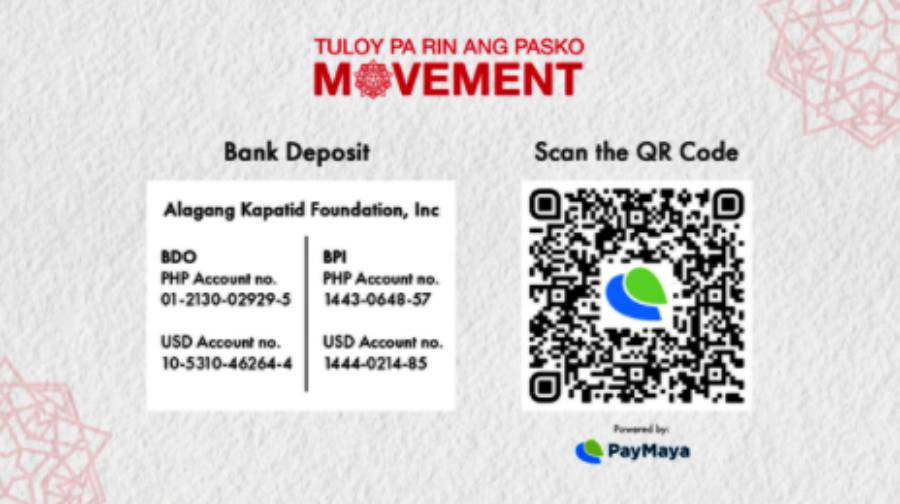 As families and communities continue to rebuild after the ravages of the pandemic and recent natural calamities, Cignal TV, TV5 and the entire MVP Group of Companies have come together for the TULOY PA RIN ANG PASKO MOVEMENT with its mission of spreading positivity and holiday cheer to fellow Filipinos, from all walks of life, this Christmas.

The Yuletide Season is the epitome of family, tradition, and celebration; whether it’s through bountiful Noche Buena feasts, family gatherings, or acts of generosity. Though the holidays may feel different this year, now is the time to imbibe the spirit of togetherness and make it most felt. Through this CSR effort, noche buena treats will be distributed to identified beneficiaries, as noche buena isn’t just about delicious food, but a special meal that represents the warmth and hope all families wish to share in the face of these uncertain times. Avenues to pledge donations have been created for those who want to be part of the movement.

The TULOY PA RIN ANG PASKO MOVEMENTinvites everyone to show compassion. It is an open call for Kapatids to be a ray of hope and brighten up someone else’s Christmas especially those in need. This season, we are urged to foster camaraderie and be positive enablers to make somebody’s Christmas happen.

To further the spread of the movements’ message, the TULOY PA RIN ANG PASKO theme song was created. Written by Louie Ocampo with lyrics by Noel Ferrer, the song speaks volumes on what this initiative represents— that each one of us, through big or small acts of kindness, can make Christmas whole and meaningful. A heartwarming music video was also released featuring various stars and personalities; all of whom believe, support, and adhere to what the movement imbibes. This season, let us all carry out the true meaning of Christmas and be a blessing to our fellow Filipinos. For those interested to be part of the TULOY PA RIN ANG PASKO MOVEMENT, you may donate through the Alagang Kapatid Foundation, Inc. through online bank transfer.

For more information on how you can extend help, visit TV5’s Facebook Page. Don’t forget to watch the movement’s music video “Tuloy Pa Rin Ang Pasko”, which is available online and will continue airing on TV5, One Sports and Cignal TV organic channels (One PH, One News, Colours, Sari Sari, One Screen, One Sports Plus and PBA Rush) throughout the holidays.